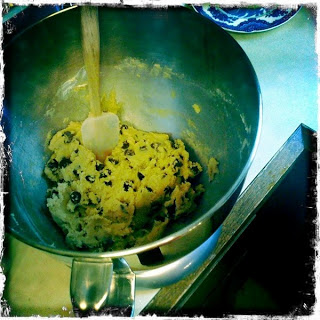 When I was trying to get pregnant (and by trying I mean, decided to have a baby, took a trip to Italy, lit a bunch of candles and came home pregnant) I bought a three pack of pregnancy tests. When I got home from Italy I knew- knew I was pg, and yet when I took that first test it came up negative.

I was devastated.
The next day and the next test provided the same result.

But that third test, it was just sitting in the bathroom cabinet, just sitting there. Taunting me with it’s non-taken-ness and I just had to take it and be done with it so I could move on and be not pregnant for another month.
But then…so faint it was barely visible to the naked eye was a second line. A line. I rushed out and bought three more tests, and then three more and finally one of those overpriced 1 in 5 women can misread a pregnancy test (say whaaa?) tests. You know the one…the one that says in big letters PREGNANT.

This past week I made The Boss some of Auntie Keek’s (Keek. Boss speak combo for Kelly and CAKE) awesomelicious egg free cookie dough. It’s my PMS fav and the little dude had a rough week so a treat was in order.
It goes a little something like this:

(typing that out I realize I used a tablespoon and a half of vanilla. Oops! My bad. It was delish though!)

The Boss and I had a lovely snack of it. And the next day we did as well. Then…then he went off to dream land. But that cookie dough was just sitting there in the refigerator. Just sitting there. Taunting me with it’s non-eaten-ness. I just had to eat it and be done with it so I could move on and not eat it for another month until I caved and made it again.
But then…so quietly no one in the house knew,  I ate a bite. And then three more bites. And then three more. And then I finished it all off.

So you see, cookie dough is just like a pregnancy test. It will taunt you until you give in. Resistance is futile.
Plus both a baby and the cookie dough will give you a belly. And both will make you really happy.