The thing about me is that I can never leave well enough alone. So if one is good, then I need two. Two is great but four would be better! And so on and so on and so on. Thus it was with my blondish hair. Oh! It was so lovely…but wouldn’t blonderish be even better? And the next thing you know, I had whore hair. Cheap, bright yellow and orange whore hair.

Actual picture of me: 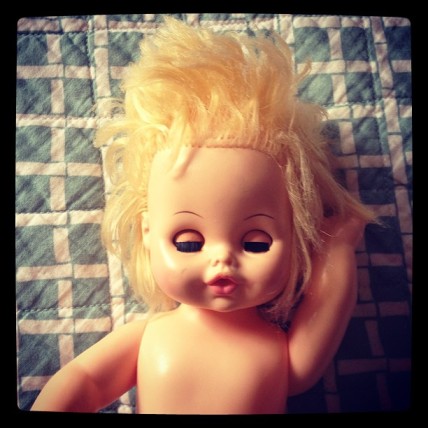 Okay not really, but when Boss found this old doll of Auntie Keek’s he declared Mommy! You two are the same! you have the SAME hair. Must remember to thank his teacher for really driving home the same/different lesson. Not only was my hair neon orange yellow but it was also the consistency of straw. Glorious, tough straw.

There was nothing to be done but cancel. Except, you don’t just not show up to the White House, am I right? I mean it’s not like Michelle was meeting me for dinner, but we were invited to tour the East Wing and see the Christmas decorations which are amazing! Zach talked me into it and after my mother in law dried my tears and handed me a diet coke we were on our way.

There was no sugar coating it. Zach tried and I told him not even to mention it or I would cry again. My mother in law tried to convince me it wasn’t that bad. (it was) and my sister in law said nothing. She just pretended my hair wasn’t neon yellow. And that? Was how bad it looked. Kel is my style twin and if she can’t even come up with a kind word…well, we know for sure it was, as they used to say, shiteous.

And it was. And no, I didn’t let anyone take pictures of me, trust me it was for the best.

I tried to hold my yellow head up high as our friends were polite enough to only widen their eyes in shock and disbelief for a mere second or two before they recovered and we chatted about anything other that the straw mop top I was sporting to the FREAKING WHITE HOUSE. The decorations this year were more subdued than last year but it was still exquisite. My two favorite decorations are in the State Room which features both the mini White House and the Creche which is beyond exquisite. Sadly none of my pictures of the Nativity turned out. This is what happens when you have an 18 month old grabbing your camera and a 4 year old missing in the East Wing. Oh yeah, did I forget to mention that we blinked and Boss was GONE?? Thankfully he found his grandmother and honestly we weren’t too worried. Security was everywhere, still we were half panicked and half joking that he just wanted to see Bo.

My husband has petted Bo. It’s the single thing I am the most jealous of in any of his White House visits.

Luckily for me, nary a Secret Service agent inquired as to why a ghetto orange blond chick like me was invited to the White House. Manners? They’re used to it? I don’t know. I will say that not even in junior high was I as self conscious as I was at the White House. UGH! Two days later after some very intense conditioning my hair was lovingly colored dark ash blond and I was able to rejoin the ranks of the non whoreish haired.

I’ve never been so grateful for chemistry.

I hope you all had a wonderful holiday!! This year feels like its going to be a good one, don’t you agree?

ivillage asked Boss what his resolutions for me would be…and he came up with some doozies! (It should be noted that though you can see my hair here it looked WAY worse in real life. WAY WORSE!)

did you make any resolutions?

11 thoughts on “A New Year….Or I went to the White House with Whore Hair so you don’t have too.”